It’s a beast because it performs consistently well and WOWs.

Now, sure… you can buy the pre-made patties, throw them on the grill this weekend and call it a day.  I’m not beyond convenience.

But for an extra 2-5 minutes (no really, that’s it!) you can take burgers to a melt-in-your-mouth level.  Not to mention it’s almost always cheaper to buy ground beef as ground beef than a pre-made patty.  (Regardless if you’re buying it from the farmer or the store!)

Here’s my story: my children have been resistant to trying burgers (again).  We deal with some legitimate texture aversion so I haven’t pushed it.  The last time I asked my kids to try it, I got a “thank-you” bite out of it, but that was it.  You should know it was plain ole hamburger.  I didn’t make those burgers.

I made these burgers – with these few minor extra steps as detailed below – my texture-averted kid actually asked for a SECOND.  It’s a huge deal for her, because I know she’s not a big fan of the ground meat texture.  This tells me the flavor was ON POINT.

You see my thoughts?

Without further ado, here’s how you do it: 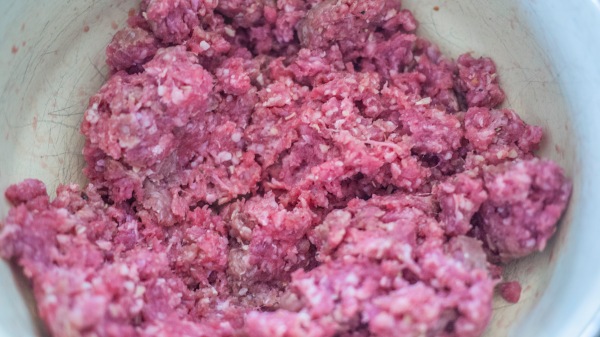 Work into patties.  Personally, I usually make 1 pound into about five burgers. You could easily make it into quarter-pounders if you preferred. Also… note how easy this would be to double or triple to suite the size and needs of your family or feast!

Grill to your preferred doneness.

In my venture to eat wholesome, nutritious foods that help support my body versus hinder it, it’s hard stuff when it comes to condiments. 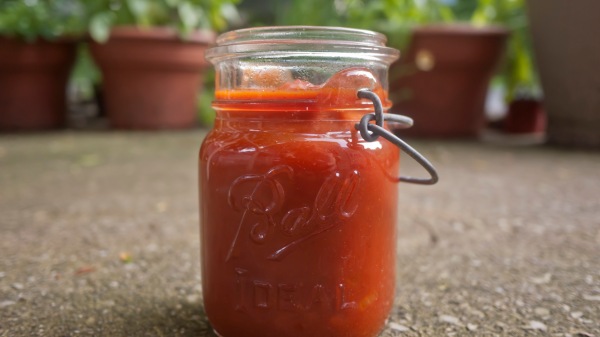 Rewind 3+ years ago: I had one-million-gazillion barbecue sauces filling the door of my fridge.  So many sauces to marinade and barbecue meats! You feeling like a certain flavor? I probably had it. I had no problems making my own sauces, too (I’ve always loved to cook, even before cleaning up our diets!)… but we had a thing for a good barbecue sauce in this house.

This is my attempt to recreate an “old” favorite that had bourbon whiskey as the base.  And if you think that doesn’t matter, you are SO wrong! I don’t often recommend this (because of the severe temptation to buy it all up!), but go looking through the conventional barbecue sauces in the grocery store.  There are SO many flavors and nuances!

Hands-down, my go-to sauce for a quick fix is Mommypotamus’ BBQ sauce… which you can see here.  But, as I’ve so stated, I love variety in my barbecue sauces.  The recipe below requires a little more prep, so it’s good for when you have some time.  (I still go back to Mommypotamus when I need a sauce quick! I love it!)

may want to salt and pepper it

Melt a hearty 2 tablespoons or tallow/lard on medium heat in pot of choice.  Capacity needs to be over 4 cups. Using a larger pot will help you cook the onions faster as there is a larger surface area on which to cook. You can use butter or other oil… but the tallow/lard is best!

While this is melting/obtaining liquid status, chop your onions and mince your garlic (however you’d like to do that…mincer, finely chopped, whatever).  How much you chop up your onion is up to you – if you don’t mind a chunky sauce, leave them course.  If you want it a smooth sauce, chop as finely as you can.  (Or use a food processor if you have it!!)

Throw the onions only into the melted lard, and As the onions are cooking, add more lard as necessary. You don’t want the onions to burn to the bottom! Saute the onions until they are turning translucent.  Now add your minced garlic. 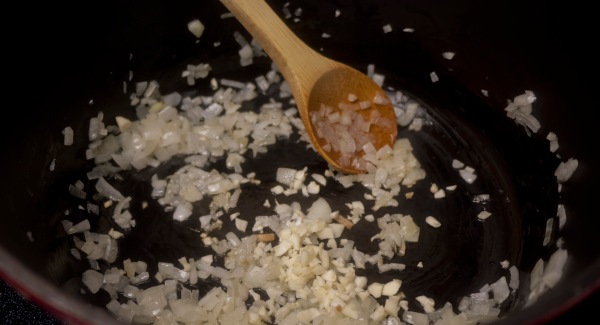 You need to keep the garlic moving as it has a tendency to burn easy.  Saute for another minute or two, until your kitchen smells like garlic heaven.

Dump the bourbon into the pot and scrap the bottom of your pot.  Scrape the bottom of the pot while the bourbon begins bubbling.  I’m a fan of wooden spoons for this (sturdy, nonreactive, etc.) but I’m sure a plastic will do, too. Let this boil for about two to five minutes while the liquid reduces.  This also burns off the alcohol.

Now add the tomato sauce, maple syrup, spices, apple cider vinegar.  Stir until combined.  You can salt and pepper at this point, but please read this first:

Now cover, and bring to a boil on medium-high heat.  Stir occasionally as you don’t want the sauce on the bottom to burn.  Once it’s good and boiling, reduce the heat to medium and let it return to a boil.  Let it stay at this temperature for 45 minutes, stirring frequently.  Taste test the sauce after 45 minutes: spicy enough?  If not, stir in another tsp of child powder and dash of salt and then let it cook another 5 minutes to let the flavors combine.

Turn the heat off and let it cool for about 15 minutes.  Then jar it up!  (And this makes a really big batch… it does freeze well!)

An option if you’re particular about the texture of the sauce – once it’s cooled slightly, you can add it into a blender for supreme consistency.

I feel like saying “Bon Appetit!” here… but that feels weird to say about barbecue sauce. So, go have some finger-licking-good barbecue. :)

The Chicken Dance and Wings

The moment I start talking about chickens, my girls are breaking out to their own version of the chicken dance (which is some combination of “chicka-chicka-brawk-brawk” and whatever funky chicken dance moves they imagine).  I think I sort of created this animal by introducing them to the polka chicken dance. (what do you want?! I’m from Texan-German descent! This is just what we do at weddings! I’m sorry!)

So I was mumbling under my breath about this recipe and of course now I’m surrounded by some pretty funky chickens.  ;-)

At any rate – this is what I REALLY wanted to write, in regards to chicken:

Chicken wings weren’t one of them.

These wings made me wonder why I’ve never been a “wings” fan. These are twice-coated BBQ wings, baked. (You can make them THREE times dipped! Instructions are below!) You could definitely fry them up (I’d highly recommend pastured tallow or lard) instead of baking, but I haven’t tried it (yet). If you do, please come back and let me know how it worked!

Someday, I’ll perfect a good, clean, nutrient-dense pizza, and make these wings, and have a guilt-free pizza and wings night. Until then – these shall do!

*Note: I didn’t list any amounts.  This is because it’s largely an “eyeball” type of recipe, and is going to change depending on the consistency of your favorite BBQ sauce.

Marinate your chicken wings for at least 30 minutes.  Feel free to do this overnight/all day (what I often do: start it marinating first thing in the morning, then come back to it when I’m ready to cook). Please note: you are going to need MORE BBQ sauce to coat the wings right before serving, so don’t use it all up on the marinating! 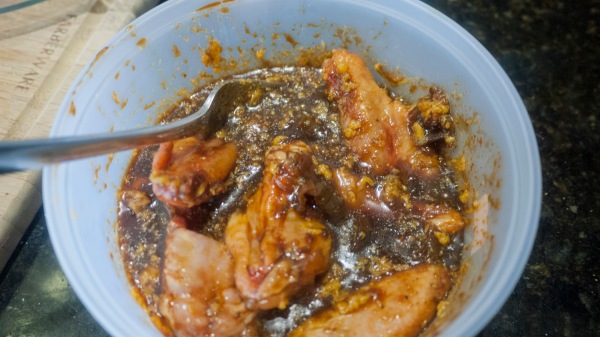 Coat your lined baking sheet with fat of choice.  These wings REALLY like to stick to the cooking sheet.

Remove the wings from the marinade, letting the excess drip off (don’t go crazy here, just do your best).

Dredge your marinated wings in the coconut flour. You may need to add more flour as coconut flour is quick to absorb into liquid.

Pat some more coconut flour on the wings as needed – if it looks like the sauce has absorbed all the flour, go ahead and add more.

Spread these wings out on the cookie sheet – at least 1 inch apart.  Crowding makes it so that they won’t cook through/evenly. 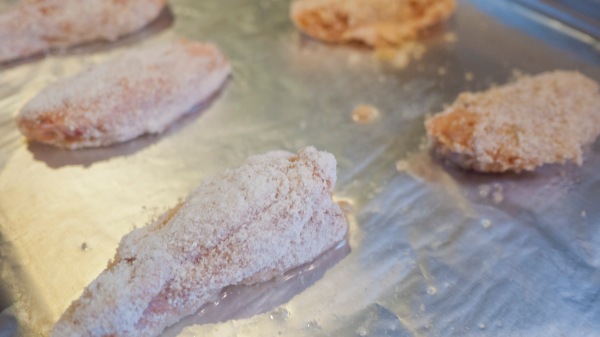 Now spoon some more sauce over these wings.

Cook for 20 minutes at 425*, turning halfway.  After you’ve flipped them at the halfway point, spoon more BBQ sauce on the other side of the wings.

If you’re feeling really saucy, you can go for a THIRD coat after 20 minutes of cooking — let the wings cool slightly, then coat the wings in another batch of your favorite BBQ sauce.  I would suggest doing this one at a time, as the flour “likes” to come off the wings if you put them all in at the same time and then “stir” them up… this won’t work.  A good method is to use tongs to dip them back in, and pull them back out, gently. Repeat this process with all your wings.

(The picture above is WITHOUT the third coat of BBQ sauce.  I simply ran out.  But seriously, you can’t go wrong making these saucy!)

And serve! Viola! And, if you’re feeling so inclined, celebrate with a chicken dance. :)

What we write the most about!